The Impact of HDAC2 Gene Expression on Anxiety

Our i-Fect Transfection Kit continues to be a potent tool for testing the impact of altered gene expression on behavior. see: SACHIN MOONAT. The Role of Amygdaloid Chromatin and Synaptic Remodeling in Anxiety and Alcoholism. THESIS Submitted as partial fulfillment of the requirements for the degree of Doctor of Philosophy in Neuroscience in the Graduate College of the University of Illinois at Chicago, 2014.

The author hypothesized that increased HDAC2 would have a positive impact on anxiety in alchohol preferring (P) rats. Specifically, HDAC2-induced histone modifications in the amygdala may play a role in the regulation of synaptic plasticity that may underlie the behavioral phenotypes of P rats. Furthermore, it could be possible that exogenous manipulation of HDAC2 levels in the amygdala may have an effect on anxiety-like behaviors and alcohol preference in P
rats. 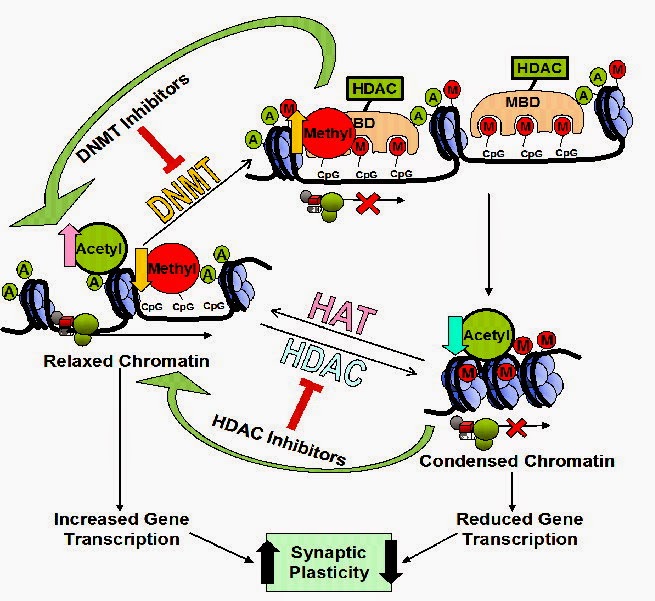 Methods: P rats that had been previously cannulated for delivery of solutions directly into the CeA were infused with either HDAC2 siRNA, control siRNA or vehicle. The siRNAs were dissolved in iFect solution (Neuromics, Edina, MN), a cationic lipid-based transfection solution, such that the final concentration of the solution was 2 µg/µL. The sequence of the HDAC2 siRNA was as follows: 5’-CAAGUUUCUACGAUCAACATT-3’; 5’-UAUUGAUCGUAGAAACUUGAT-3’. Some of the HDAC2 siRNA (Qiagen, Valencia,
CA) had been modified to include a 5’ Alexa Fluor-488 fluorescent probe in order to
determine the transfection efficiency and cellular localization of transfection. The control
siRNA used was the AllStars Negative Control siRNA (Qiagen), which shows no
homology to any known mammalian gene. To prepare the vehicle, RNase-free water was
dissolved in the iFect solution in place of any siRNA. The solutions (0.5 µL) were
infused bilaterally into the CeA of P rats using an automatic infusion pump which
resulted in a dose of 1 µg of siRNA per side. The automatic pump was attached to a
microdialysis probe which seated in the guide cannula and extended 3 mm past the tip of the cannula into the CeA.

For the experiments which looked at the anxiolytic effect of HDAC2 siRNA
infusion, P rats were infused with either HDAC2 siRNA, control siRNA or vehicle at the
end of the light cycle. 16 hours after the infusion, the rats were tested for anxiety-like behaviors. Immediately following behavioral testing, rats were anaesthetized and brains
were collected for further analysis.
For the voluntary drinking experiment, P rats were infused with either HDAC2
siRNA or vehicle when the bottles were changed following the third day of 9% ethanol
exposure. The rats continued to be monitored for the intake of 9% ethanol for 7 days
following the infusion. After the final day of voluntary drinking, the rats were
anaesthetized for collection of brains and blood to confirm the cannula position and the
blood alcohol levels, respectively.

Figure. The effects of HDAC2 siRNA Infusion into the CeA of P rats on voluntary ethanol consumption as measured by the two-bottle free choice paradigm. Monitoring the voluntary ethanol consumption of alcohol-preferring (P) rats via the two bottle free choice paradigm following infusion of vehicle or histone deacetylase isoform 2 (HDAC2) siRNA into the central amygdala (CeA) demonstrates that high HDAC2 levels may mediate the high alcohol drinking behaviors of P rats. P rats were given access to water and 7% ethanol followed by water and 9% ethanol. On the sixth day of ethanol access P rats received infusion of vehicle or HDAC2 siRNA and consumption of water and 9% ethanol were monitored for sevnfusion. Total fluid intake did not significantly differ between the groups. Values are represented as the mean ± SEM of the ethanol consumption (g / kg / day) and total fluid intake (mL) plotted daily for n=6 rats per treatment group. *Significantly different between the groups.
This data suggest reduction of HDAC2 levels in the CeA leads to reduced DSD associated with a reduction in anxiety-like behaviors and alcohol preference in P rats and could prove to have therapeutic value.

Many of my backstories have featured Pain Researchers.  In several, I have featured use of our our i-Fect ™ Transfection Kit for enhancing the delivery of siRNA in vitro and in vivo to study the expression of genes invovled in Neuropathic and Nociceptive Pain.

I am excited to present a recent publication that includes use of this kit to study Opioid-Induced Hyperalgesia. In this study Dr. Zaijie Jim Wang and his team at University of Illiniois Chicago down regulate CaMKII alpa expression. Their data implicates, for the first time, an essential role of CaMKII alpha as a cellular mechanism leading to and maintaining opioid-induced hyperalgesia.

You can subscribe to our RSS feed or by e-mail below.